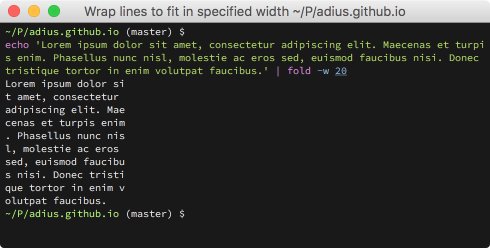 This is the second post in my Command Line Monday series.

On Unix-like operating systems there is a large number of command line tools for text-processing. One of this tools is called fold and helps you to wrap lines to a certain length.

fold is part of the Single UNIX Specification and is therefore already pre-installed on every unix-like operating system.

The easiest way to use fold is to simply call it on a file.

This will wrap every line of the file to the default line length for Unix terminals of 80 characters and print the wrapped line to stdout. From there it can easily be redirected into a new file or to another command line tool for further processing.

As you may have noticed, fold doesn't care about word boundaries and simply cuts off words when the maximum number of characters is reached. By specifying the -s flag fold can be set up to wrap the line at the closest preceding whitespace character.

If you don't want to use the default terminal width for wrapping you can set up a custom one with the -w flag and also combine it with the -s flag: 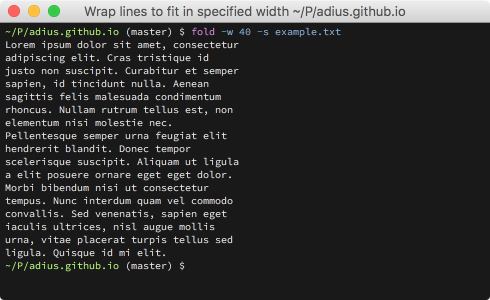 And last but not least the command line flag -b lets fold count bytes rather than characters. This can be especially useful if the input contains tabs and the tab characters shall be counted instead of the number of spaces they represent. 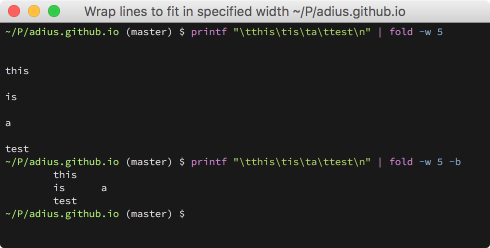 As a final note I recommend to also check out the GNU version of fold. As always, it provides a saner syntax including long flags (--width in addition to -w, --spaces for -s and --bytes for -b) and is actively maintained by the GNU community. Therefore it's also more stable and secure than other implementations.