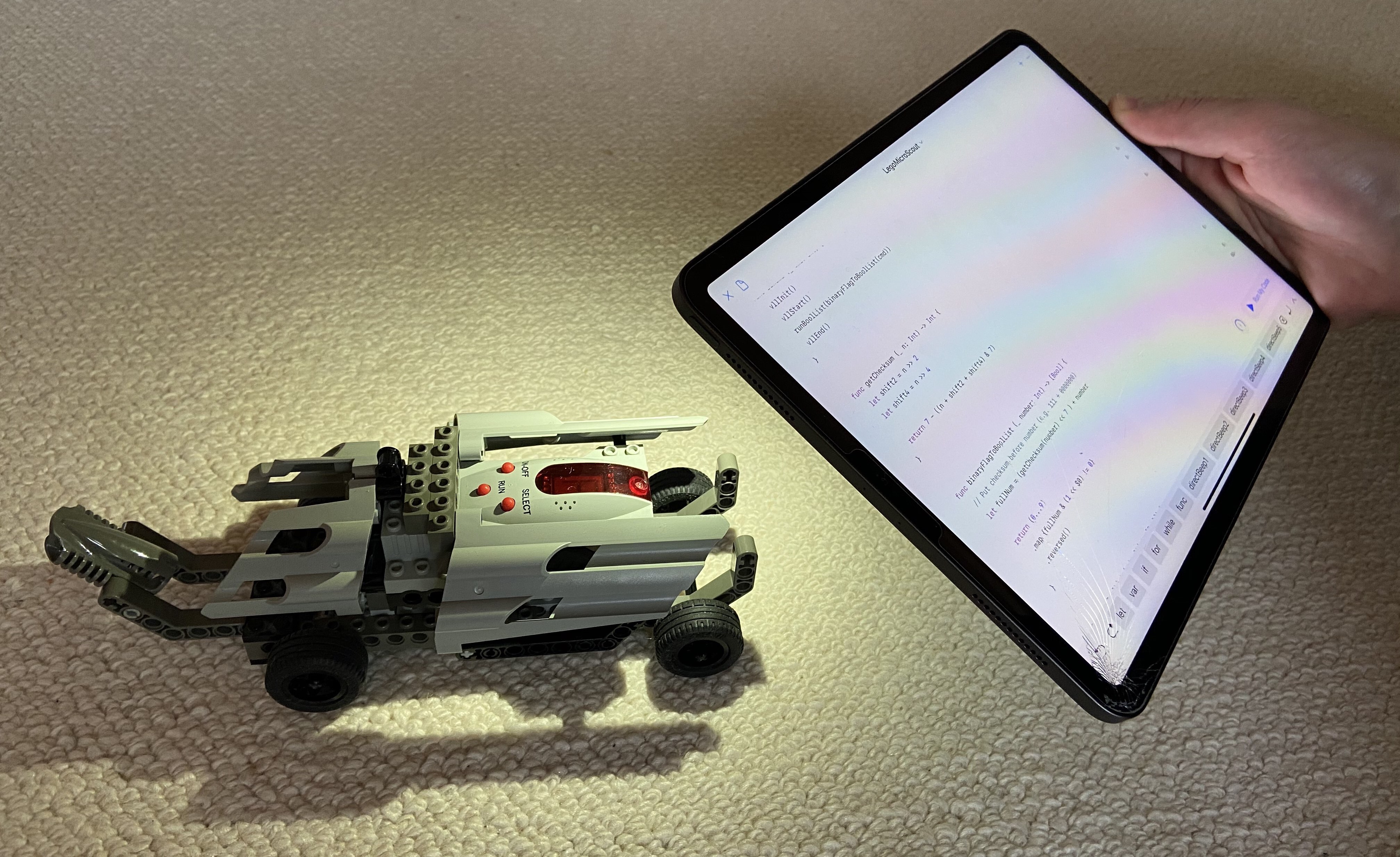 Each set contains a programmable micro controller and while they seem to be from different LEGO lineages, they actually share the same code base. They were the smaller siblings of the full fledged yellow LEGO Mindstorms RCX controller featured in the Robotics Invention System.

Although there were a whole lot of programming languages and development kits available for the RCX, the options for our 4 sets were more reduced. The Scout at least supported LEGO Assembly (LASM) – as described in the Scout SDK – but the others only could be programmed with VLL (Visual Light Link).

There is actually one more robotic system which was programmed via VLL – LEGO Spybotics – but VLL was merely used as an abstract transmission protocol for it.

VLL is comprised of short light pulses (20 ms - 400 ms) which amount to 35 bit binary codes. Each code triggers one action of the micro controller.

For a detailed description of the format check out elecbrick.com/vll/ and for a listing of all the possible codes of the different controllers check out the last 2 pages of the Scout SDK.

In order to transmit the codes to the controllers, there are 2 different ways:

In case of the code pilot this was achieved with a set of barcodes which could be slid past the light sensor to generate the necessary light pulses.

The LEGO set included a printed manual with all the codes and in order to transmit them to the controller, you simply swept the controller's photo-diode past the barcode.

The more straight forward approach is to directly flash the light patterns at their light sensors. The LEGO RCX micro controller actually was natively able to produce VLL to control its 4 siblings.

But since the patterns are quite simple, ultimately every programmable light source can be used to control the Micro Scout.

E.g. here is a tutorial on how to program a Feather M0 Bluefruit LE board with CircuitPython to breath new life into a LEGO R2-D2.

And this is were it gets really interesting: Since an iPad has an LED (the camera flash), a quite capable development environment (Swift Playgrounds), and supports one of the best programming languages around (Swift), it's easily one of the most approachable, yet also most powerful ways to program via VLL.

To get started we first need to write the necessary code to transmit the VLL commands. I will focus on the Micro Scout instruction set, but the code could be easily extended to also support the other controllers.

Create a new Playground in Swift Playgrounds and paste the following code, or download the full Playground with additional features.

And that's all we need! Actually quite simple once you've figured out how the VLL protocol works. You can now start writing small programs and execute them on your Micro Scout by simply adding them at the end of the file and pressing "Run My Code".

For example driving a car forward for 5 seconds, waiting for a flash, then returning and delivering a beep message:

Here is a short video of the code in action. There is also a version on YouTube if this embedded version doesn't work for you.

I guess the car is mocking me for not having written a more interesting program, but I wanted to leave this challenge for you! 😉 If you come up with an interesting build, please let me know!